Unlike some other rabbit breeds, Holland Lops come in a variety of colors, which makes them interesting genetically and fun, as well. There are two main varieties of Holland Lops which are typically seen at shows-- solid or broken. Solids are one solid color that come in seven of the different groups. Brokens are any recognized color among Holland Lops combined with white and are considered one of the eight groups of Hollands by color.  The seven solid color groups and a few common colors representing each group are:


​There are five major genes affecting color in Holland Lops. We won't go into detail but will note them to show that there are many different genes at work that determine a Holland's color. All genes occur in pairs, with one from each parent, so that is why a gene is expressed with two letters. They are:

Some examples of the different colors found in Holland Lops: 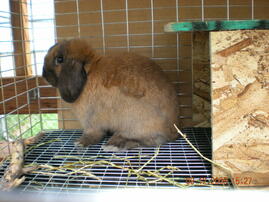 CRICKET, a BLACK TORT, was one of Shamrock's original Holland Lops. The TORT (short for Tortoise) tends to win a lot of shows in the Holland Lop breed, perhaps since it was an original color for the breed. The two main variants we have had or have at Shamrock Rabbits are the black tort and the Blue Tort.  The Black Tort has the dominant form of the Dense/dilute gene (expressed as D_) resulting in a black color. The Blue Tort has the recessive form of the Dense/dilute gene (expressed as dd).  The photo of Cricket, one of our original does, is an example of a black tort. Gizmo, seen on our "Bucks" pages in the "Meet the Herd" section is an example of a blue tort.  The Tort is part of the Shaded (aka light chinchilla gene) color group among Hollands, represented by colors that darken on areas around the nose, ears, eyes, lower sides of the body and tail. The genotype of a Black Tort is expressed as:   aa B_ C_ D_ ee . 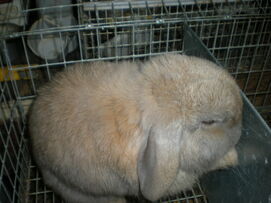 GIZMO, is one of our new bucks here at Shamrock Rabbits. He is a BLUE TORT, which is a dilute version of a Black Tort. As noted under the comments for CRICKET, a BLACK TORT, the BLUE TORT is a diluted version of the BLACk TORT, genetically expressed as (dd). If a rabbit appears as a dominant Dense gene and doesn't at least carry the recessive dilute gene, expressed as (Dd) then breeding to a rabbit appearing dilute (dd) will always result in the offspring appearing to be the dominant Dense version of the Dense/Dilute gene. The genotype of a Blue Tort like Gizmo is expressed as:
aa B_ C_ dd ee .  Notice that the only difference between a Black Tort and a Blue Tort in how they are expressed genetically is the Dense/dilute gene (Dd). The Black Tort can either be DD or Dd with regard to the Dense/dilute gene and still appear to be a Black Tort, which is why it is expressed  as D_ (the _ being a wild card type of notation). 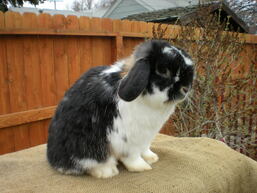 As noted previously, the BROKEN variety and group is any recognized color combined with white. JIMMY BUFFETT (pictured to the left), is a BROKEN BLACK OTTER.  In a broken-colored Holland Lop, they are about 50% white and 50% the other recognized color. If a broken buck is bred to a broken doe, 25% over time, you will get a Charlie rabbit. A Charlie is mostly white in color, say 75-90% with just a few markings of the other color. As far as the Black Otter color goes; it is characterized as part of the Tan group (the surface color described as part of the black Self group with orange/gold markings and ticking on the rabbit). In Jimmy Buffett's case, he has the gold marking on his neck and around his nose and eyes. The genotype of a solid Black Otter Holland Lop is:  at_ B_ C_ D_ E_ . 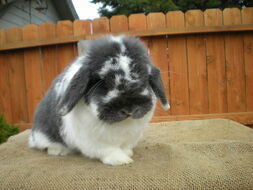 Louise, was a broken blue doe.
LOUISE, was one of our prettier does here at Shamrock rabbits. She was the pretty BROKEN BLUE color. Again, the BLUE color is the dilute version of black, expressed as:  dd . The BLUE is in the SELF group of Holland Lop colors, which means the appearing color extends to the base of the hair shaft.  A solid BLUE rabbit's genotype is expressed as:  aa B_ C_ dd E_ .  As a comparison, a solid Black Holland Lop's genotype would be expressed as:  aa B_ C_ D_ E_ . The only difference between a black and a BLUE Holland Lop in their geneotype is the Dense/dilute gene-- the black expressed as DD and the BLUE as dd . 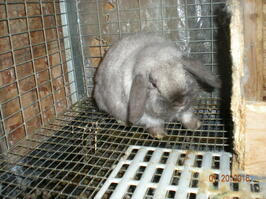 Sorcha, was one of Shamrock's Sablepoint colored does.
SORCHA, was a SABLEPOINT doe.  SablePoints have proved to be a very popular color with Shamrock Rabbits' customers. They have the look of a Siamese cat. Like the Tort, they are part of the Shaded color group of Hollands. The Sablepoint Holland's genotype is expressed as:  aa B_ ch1_ D_ ee .  As a comparison the Black Tort's genotype is expressed as: aa B_ C_ D_ ee . So the difference in the genotype between a SablePoint and a Black Tort is found in the Full color/albino gene (CC) with the Black Tort having the dominant form of the gene and the SablePoint having one of the recessive forms of that gene. 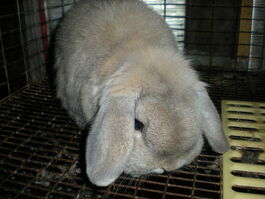 Nemo, a cream colored buck.
NEMO, is one of our new bucks. He is a CREAM colored buck.  The Cream color is fairly rare among Hollands. We had a Fawn at Shamrock Rabbits, which was Monty. our first buck back in 2009.  Both the Cream and the Fawn are part of the Wideband group, although only the Red has a true genetic wideband. The Cream is the dilute version of an Orange rabbit and the Fawn is a variation of the Orange.  The Cream's genotype is expressed as:   A_ B_ C_ dd ee .   The Orange and Fawn colored Holland Lop genotype is expressed as:  A_ B_ C_ D_ ee .