Watch for updated information on our current broken does!

A FEW OF SHAMROCK'S PAST BROKEN DOES: 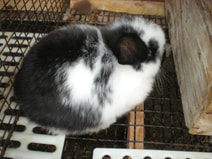 Sheenagh at just over 8 weeks old in her hutch.
SHEENAGH is a Broken Black doe.  Her sire was Smoky and her dam was Maddi.  She was born in February 2015 and passed away in 2018.

Sheenagh , like her dam Maddi, was a very good brood doe, having several healthy litters. Unlike other Holland Lops, she was a very spirited doe, even a bit surly at kindling time. 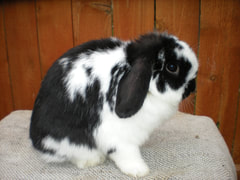 Maddi, in April 2015, at just over 1 year old.
MADDI, is a Broken Black doe, born in April 2014. She was born from line-breeding Shamrock's Rosebud and Swan Valley's Connagher, who shared Grand Champion Blue Storm Louis as a common sire ancestor. I was quite impressed with Maddi's first litter with Smoky. The combination of Smoky's smaller, compact size and good head & body combined with Maddi's nice teaspoon ears produced a nice litter.

Notable rabbits in MADDI's pedigree, starting on the sire side include:On her dam (mother's) side: 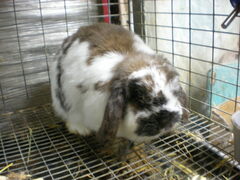 PENELOPE, is one of young new Broken Tort does. She mothered a few Lion Lop litters with sire, Pooh Bear. She kindled her first Holland Lop litter with Gizmo as sire in January 2019. Watch for photos of Penelope. 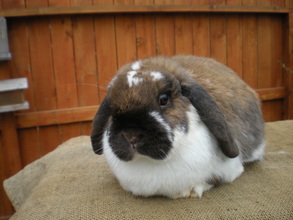 POLLY is a Broken Tort doe, born in June 2014 from Shannon.

Notable rabbits in her pedigree, starting on her impressive sire side include:

On Polly's dam side: