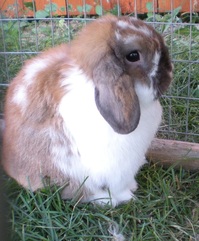 ABOUT THE HOLLAND LOP...

The small lop-eared rabbit known today as the Holland Lop is the result of experimental breedings by Adriann de Cock, of Tilburg, the Netherlands (aka Holland). As a French Lop and Dwarf enthusiast, De Cock understood that the French Lop’s size (15 pounds) was a hindrance to its popularity and felt it’s sweet disposition might be better preserved if crossed with the Netherland Dwarf (two pounds) in an effort to minimize its size.

His first attempt to breed a miniature version of the French Lop occurred in 1949, but the results were a failure. In 1951, he again tried the cross, but this time he reversed gender of each species resulting in greater success, but the offspring had upright ears. To help correct this, a doe from this litter was bred to an English Lop buck with longer lopping ears.

Adriann de Cock continued to develop these lines before distributing/promoting his stock to other breeders. Finally, in 1964 the Holland Lop, or the Dwarf Lop as it is known throughout Europe, was recognized by the Netherland’s Governing Rabbit Council and a full standard of perfection was adopted. As de Cock hoped, the popularity of the breed spread throughout Europe and then America. Aleck Brook, founder of the Holland Lop Rabbit Specialty Club (HLRSC), is credited with having first imported the Holland Lop to America in 1975. The Holland Lop was recognized by the American Rabbit Breeder’s Association (ARBA) in 1979.

Being the smallest of the Lop rabbits (3-4 pounds), Hollands make a great pet because they don't require a lot of room. Hollands are an interesting breed because they are found in a multitude of colors and their popularity is further due to their cuddly size and gentle, friendly nature.

*This information was published under the educational exception of the Fair Use Rules in the U.S. Copyright Law.